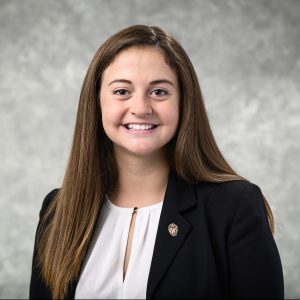 Originally from West Bend, WI, Alyssa is a student in the Wisconsin School of Business majoring in management & human resources and political science, as well as earning a certificate in Spanish. She is very involved in conservative politics and has interned in the Governor’s Office and for the Republican Party of Wisconsin, and she also serves as the Vice Chair of the College Republicans. Alyssa’s other involvements on campus include being a part of the Wisconsin Admission Volunteers, the Political Science Student Association and the Collegiate Farm Bureau. Additionally, she spent the past summer studying abroad and traveling throughout Scandinavia with the Brittingham Viking organization, which she is now a proud member of. Alyssa currently works for the Wisconsin Alumni Association as a political advocacy intern, where she makes her abundant pride for the state and university apparent. After graduation, she hopes to work in Washington, D.C. for a few years before returning home to Wisconsin.