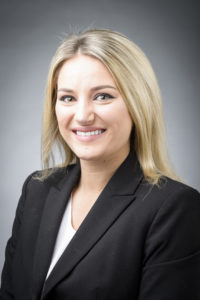 Engelke, a native of Rewey, Wisconsin, is pursuing a degree in marketing with a certificate in digital studies. As a freshman on campus, she joined the Wisconsin Homecoming Committee and Women in Business and began tutoring young students through Badger Volunteers. Her sophomore year, she began interning for the Wisconsin Athletic Marketing Department and became president of the Homecoming Committee. As an upperclassman, Engelke led the university through Homecoming Week 2017 and took the reins marketing the Wisconsin Women’s Soccer team’s 2017 season. One of the best moments her junior year was teaming up with the “We’re Better Than That” organization to put on a panel discussion about preventing campus sexual assaults. She has spent time studying business in Dublin, Ireland, and last summer interned in women’s brand marketing for Under Armour in Baltimore, Maryland. This year, she joined the marketing team for Men’s Basketball and continues work with the Homecoming Committee and Badger Volunteers. After graduation, Engelke plans to pursue a career as a sports agent.